Our Home > What We Do > Floodplain Management > Flood Awareness

Who can I call? 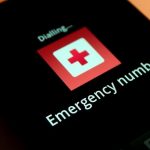 Nevada Floods. Are You Prepared?

Know Your Flood Risk!  Find out if you live in a flood zone by going to Nevada Floods website.

Be Prepared!    Homeowner’s insurance does NOT cover floods!  Purchase flood insurance if you live in a flood-prone area. To find out more about the National Flood Insurance Program, click the link below to access Federal Emergency Management’s Floodsmart page.

Helpful Links: Click on the links or photos below to find out more information about how to prepare for disasters, including flooding. 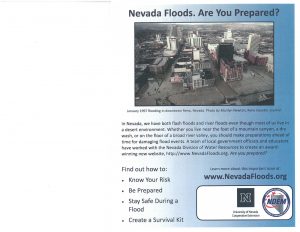 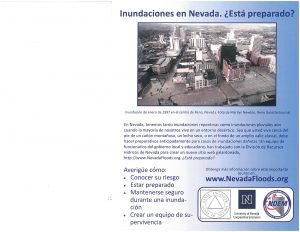 Learn (and share) how open floodplain lands are the best protection from flood hazards in the Carson River Watershed:

Learn how Agriculture is a good fit for Carson River floodplain lands.

Officials can discover why open floodplain lands are worth conserving in the Carson River Watershed.

A case for conserving open floodplain lands is made to developers:

Nevada has two main types of flooding.  River Valley Flooding occurs in valley bottoms during large winter storms, when prolonged heavy rain falls on mountain snow packs.  The New Year’s flood of 1997, which caused tens of millions of damage in the Truckee, Carson and Walker River watersheds, are examples.

Alluvial Fan Flooding occurs along small creeks and usually dry “washes” that emerge from the bottom of mountain canyons.  Alluvial fans are susceptible to violent flash floods shortly after intense summer thunder showers.  These types of floods are unpredictable.  During a flash flood, former channels can become clogged with rocks and sediment, sending deep, fast-moving floodwater down into new locations. 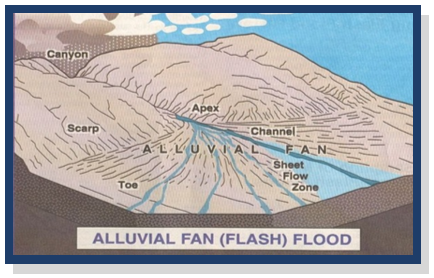